The overall scientific aim of this research cruise is to explore acoustic backscatter data, video and stills imagery and physical samples of the sediments at a range of scales for the characterisation of benthic habitats and other associated features of interest in an understudied area of high conservation and natural resource value. Further, this proposal will also explore emerging and novel technologies to enhance our understanding of species diversity in these priority marine ecosystems. This work will be conducted at a range of marine protected areas, special areas on conservation – offshore banks and features of interest in the Malin Sea.

Output from the cruise is also feeding in to a larger project Marine Protected Area Management and Monitoring (MarPAMM), developing tools for monitoring and managing a number of protected coastal marine environments in Ireland, Northern Ireland and Western Scotland. Being able to better understand the physical and biological processes operating at the network of sites will enhance management across a range of locations and allow best practice across the range of partners. Our aim is to understand the physical and biological processes affecting the coastal environment and its marine species. This will improve management, conservation and sustainable development of the marine resource, including engagement with a wide variety of stakeholders. We work with Agri-Food and Biosciences Institute, Marine Scotland and Scottish Natural Heritage, University College Cork; Scottish Association for Marine Science and BirdWatch Ireland to collect data on the abundance, spread and movement of marine protected species and habitats. This will help us produce new habitat maps and develop models for a range of species.

A team of multidisciplinary scientists from across multiple institutions within the UK and Northern Ireland have set sail from Galway for the Backscatter and Biodiversity CE19007  science cruise. We also have onboard an Artist in residence who has an interest in marine ecology and wishing to link science with art and a documentary filmmaker

One of the aims for this cruise is to explore emerging and novel technologies that are non intrusive to enhance our understanding of species diversity in these priority marine ecosystems. Our first day at sea was spent carrying out safety drills (Photo 0632 shows the team at the muster station wearing their life jackets) and running trials with our scientific sampling equipment. 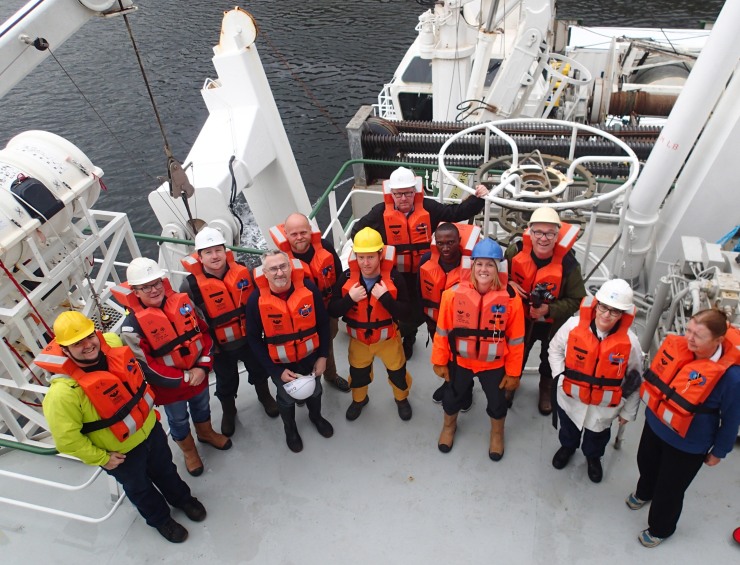 One method will be to deploy Baited Remote Underwater Video Cameras or in short “BRUVs”. These camera systems will have a bait bag containing Mackerel and Squid, lights and a video camera which will allow us to look at the mobile scavenger community present within these marine protected areas by deploying these cameras for three hours at a time. The team will deploy 6 BRUVs across our different sampling sites.

We also have a dedicated ROV (Remotely Operated Vehicle) team and a marine tech from 2G Robotics who is onboard to get the laser scanner which is attached to the ROV running so that we can do fine scale habitat mapping within these protected areas. This will allow us to achieve an unprecedented level of resolution compared to what is normally the case using acoustic techniques, and will hopefully allow us to understand how the structural complexity is influencing the ecology of these unique environments.

Ocean scientists use robot to survey wreck off Ireland.

Ocean scientists from across Ireland, Northern Ireland and Scotland have been using a remotely operated vehicle, called Holland1 to investigate the shipwreck off Malin Head. Firstly we used the eco sounder from the ship to give us a detailed map of the wreck and seafloor around it. 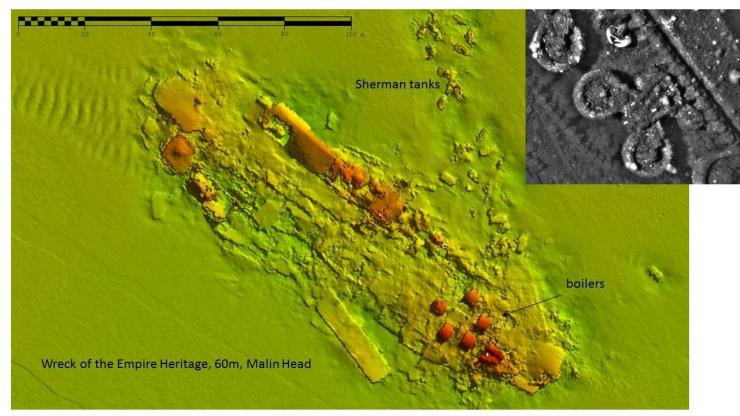 Based from the research vessel RV Celtic Explorer and led by Dr Chris McGonigle from the University of Ulster, hours were spent remotely filming and photographing the wreck ‘SS Empire Heritage’. Sunk in 1943 the wreck is a popular deep scuba dive. When the ship was lost from a German torpedo she sank with her cargo of US Sherman tanks.

Today the seabed is littered with tanks. These structures have since become valuable homes for all sorts of sea creatures living in and around the wreck.

We took advantage of using the wreck to fine tune the ROV and laser scanner prior to using it to map, photograph and measure within the marine protected areas we will visit during this science cruise.

Holland1 is a 2.5m long submarine equipped with technology to enable the scientists to see the wreck as it has never been before. A laser scanner fires thousands of beams of light which produce an incredibly detailed picture of the seabed, and wreck, over which the robot is flying.

These test dives set the scene for the following week as the Celtic Explorer continues to explore and document the seas around Ireland.

Another busy and successful day at sea, the sea state off of the Irish Coast has been kind to us with calm seas and sunshine allowing us to achieve a lot of scientific research.

We were also very lucky to see a Minkie Whale swim past the front of the ship in the afternoon. Our first site is a Special Area of Conservation as it has a large diversity of marine life and is a shallow sand bank area exposed to strong tidal movements and disturbance from storm events.

The Drop Down Video Camera or DDV is a great non intrusive way of monitoring the biodiversity of an area.

The Drop Down Video allows us to access the scavenging (animals which eat dead things) community within a marine ecosystem and allows us to look at which mobile animals are present within the area. Our first drop video was in an area of rocky reef with lots of beautiful colours and was just full of marine animals.

The drop down camera is also used to ground truth the Backscatter data which we used to produce the image of the seafloor, it allows us to visually see the type of sea floor on camera. The use of the drop down camera requires good communication between the captain on the bridge, the winch man and the scientist operating the camera.

Today was very much a multidisciplinary research day as we had habitat mapping scientists running the Multibeam Eco Sounder (MBES) and Remotely Operated Vehicle (ROV), we also deployed two Baited Remote Underwater Cameras ( BRUVs). The North Coast of Ireland is notorious for very strong tidal flows. Each piece of scientific research equipment has its limits of tidal flow that it can operate under so we as scientists need to be flexible when it comes to research at sea and be prepared to swop over research methods at peak tidal flow.

When the current was to strong for the ROV it was recovered back onboard the ship and we decided to deploy the BRUVs. The Baited cameras allow us to see which animals of the scavenger community are living within the marine community. We are particularly interested in finding the common skate or Flapper Skate as it is known. The common skate, as its name would suggest used to be very abundant in the Irish waters but their populations have declines rapidly. One of the objectives of the Marine Protected Area Management and Monitoring (MarPAMM http://www.mpa-management.eu/) is to look at Flabber Skate population dynamics and in collaboration with “Seamonitor” the partner project which is tagging the Common Skate we hope to answer some important unknown questions about this once common marine animal.

The two baited cameras successfully deployed and recovered, showed some interesting visitors to our baited camera but as yet no Flapper Skate

Onboard the Celtic Explorer we have a small grab which we use for looking at infaunal biodiversity (animals which live inside the sand) and for ground thruthing our backscatter data from the Multi Beam Echo Sounder (MBES).

If on the backscatter it looks like we have soft sand then we can validate this by taking a grab of the seafloor. While deploying the grabs we got an interesting surprise in the wet lab when sorting through the grab return, a flame shell also known as a gaping file shell (Latin name Limaria hians). This small (30mm) bivalve mollusc looks a bit like a small scallop but has its red tentacles permanently visible (hence its name flame, making it vulnerable to predation) it is a specie of priority conservation within UK waters. They need protecting and here is why

Take a sandy seafloor (much like a desert), barren featureless part of the seafloor and add flame shells. They use a sticky substance which binds sediment, shells, bits of floating seaweed and other debris to create nests which become a protective house for not only them , their neighbours and for juvenile fish. This makes flame shells a habitat forming specie and for this reason they are important for marine ecosystems. Another habitat forming specie which is also a priority specie for conservation in UK waters are feather duster worms (Family Sabellidae) as they form large beds/matts on the seafloor also creating refuge for other small marine animals. Using our drop down video camera (DDV) another method for ground truthing our backscatter data we came across large areas of feather duster worms which was a great excitement to all within the science team. 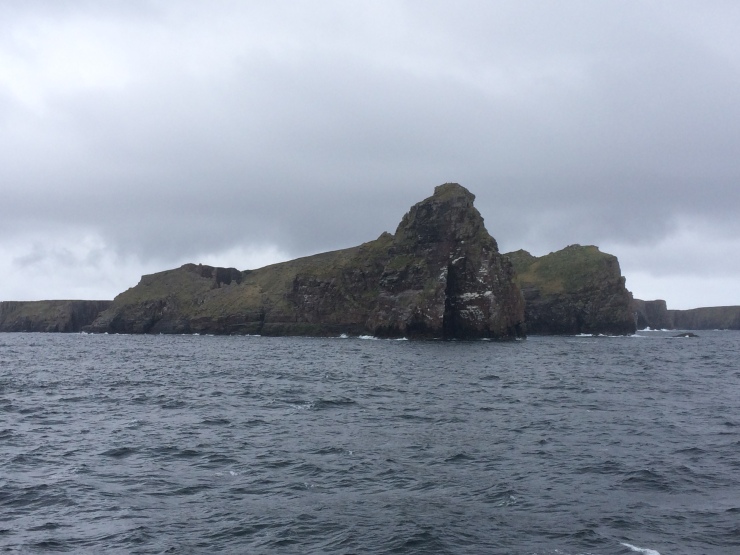 Tory Island is a small island 15 kilometers north west of County Donegal with 140 inhabitants. Tory Island (Photo) is designated a special area of concervation (SAC) by the National Parks and Wildlife Service due to its  precious intertidal rocky reef. Tory Island seafloor has never been mapped (Admiralty chart being the only source of information) and its ecology has not been examined in a great level of detail prior to our visit. Our team of multidisciplinary scinetists onboard The Celtic Explorer have 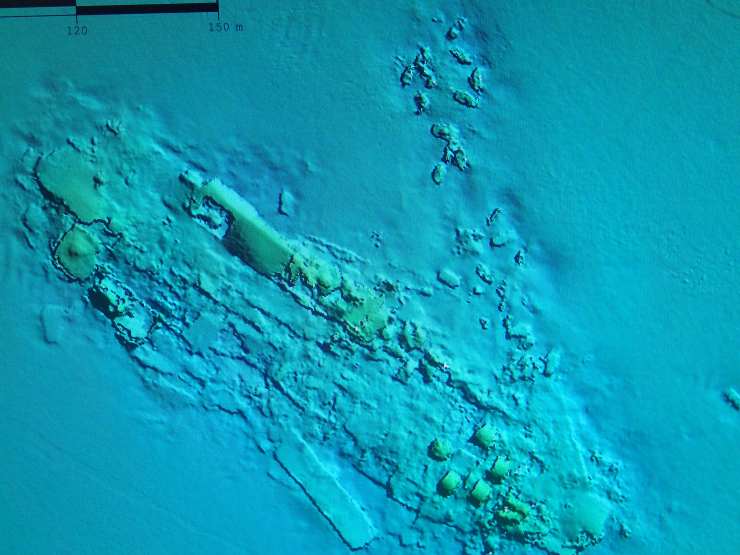 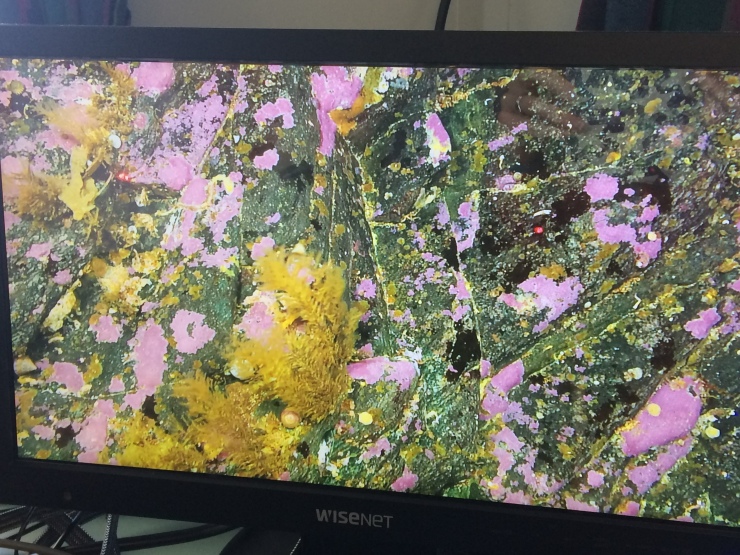 The team have found differing habitats on different sides of the island which has related nicely to what would be expected when looking at the echo sounding backscatter data. More work to better understand the links between backscatter and biodiversity will be done back on dry land

SO WATCH THIS SPACE